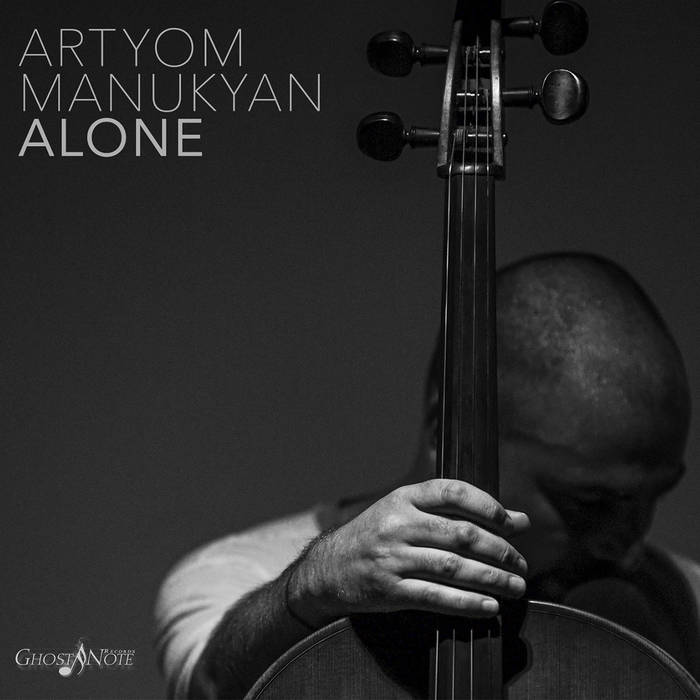 On Alone, Artyom Manukyan takes his place as one of the most inventive cellists on the music scene today.

The cello is an extremely flexible instrument. It can be bowed like a low-register violin or plucked like a string bass, and can sound quite natural in both very traditional and avant-garde settings. Despite that, it took some time for it to be adopted as a solo instrument in jazz, starting with Harry Babasin and Oscar Pettiford in the 1950s and evolving to the present time.

In his career thus far, Artyom Manukyan has shown that the cello can be played not only in classical music and rock settings but as the lead instrument in jazz. His virtuosity is equaled by his creativity and willingness to stretch himself while creating new music with a strong emphasis on his themes and adventurous improvisations.

Alone, his second release for Ghost Note (following Citizen), features Manukyan as both a one-man orchestra on his cellos and in close interaction with five notable guests. His ten originals cover a variety of moods while often being atmospheric, wistful, and rhythmically infectious.

The opening “Intro” has a brief poem by Narek Hovsepyan that is accompanied by Manukyan. “The Form” features the cellist playing catchy rhythmic patterns while soloing on top. After the brief “Outro” (which has one of two appearances by bassist Tim Lefebvre), Manukyan duets with pianist Vardan Ovsepian who improvises quite freely on “Last Chance To…” “Duet #2”has the up-and-coming singer Michael Mayo blending in perfectly with the cellist while “#Celloart” gets a bit funky.

“Alone” introduces a particularly haunting melody along with a catchy rhythm. On “Next Step,” Manukyan expands the sound of his cello, alternating virtuosic passages with droning notes that hint at a sitar. “Every Time She Goes” features some wordless vocalizing by Gretchen Parlato” before “Not Alone” closes the colorful set as it began, with some poetry from Narek Hovsepyan.

Artyom Manukyan first gained attention for his playing in his native Armenia. He traveled the world as the youngest member of the Armenia Navy Band before settling in Los Angeles. His career since then has found him playing cello in a wide variety of settings including classical, rock and jazz, sounding comfortable no matter what the genre. He has also written film and television scores, toured with Kamasi Washington, Melody Gardot, Peter Erskine and Tigran Hamasyan among others, and leads his electro-jazz quartet Artyom.

On Alone, Artyom Manukyan plays with consistent brilliance and is consistently unpredictable. Alone is an early milestone during what will certainly be a very significant career.